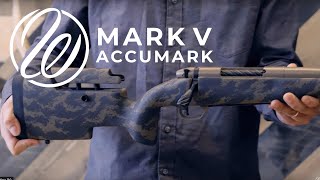 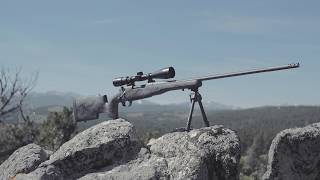 Must be 18 or older to purchase rifle ammunition. Shipping not available to P.O. Boxes, International Addresses, AK, CA, HI, MA, CT, IL, NY nor DC residents. Residents of DE, KS, OH, and WA may have additional restrictions. All ammunition is shipped domestic ground and an adult signature is required. We do not accept returns on ammunition.

The Accumark Pro now carries all the legendary performance of the Accumark, plus custom features driving it to the next level of performance. A carbon fiber stock provides excellent stiffness and lightweight attributes for the shooter looking for magnum range, but wanting to cut ounces. A perfect combination of accuracy, weight, and aesthetics with Cerakote® finish on all metal work guaranteeing a life of rugged dependability.

All Mark V® rifles are guaranteed to shoot a 3-shot group of .99” or less at 100 yards (SUB-MOA) from a cold barrel when used with Weatherby® factory or premium ammunition within Two-Years of Verified Purchase Date to Original Purchaser.

By adding an Accubrake ST you will signiﬁcantly reduce felt recoil up to 53%. Available in four different barrel diameters, with thread protector, for a perfect brake-to-barrel contour. Included with All Calibers.

The shortest in the industry (as compared to typical 90 bolt throw). Allows for faster chambering on follow-up shots and greater bolt-to-scope clearance.

GALLERY OF GUNS CUSTOMIZE
0
Your Cart